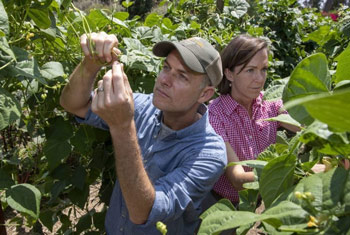 Documentarian John Chester and wife Molly, true romantics, buy 200 acres of dry land one hour north of LA. They document the next eight years with love and glorious photography. They revive the soil and nurture it with a virtual Noah's Ark of eating and defecating cuties, from a loveable sow to a living rooster and lambs and bulls and critters they didn't even have to import.

Climate change is never explicitly mentioned in the documentary "The Biggest Little Farm," one of the year’s best films, but it hangs all over the deep, rich story of the Chesters, a pair of hardscrabble idealists who move from the concrete jungle of Santa Monica to start a 200-acre, sustainable farm from scratch. 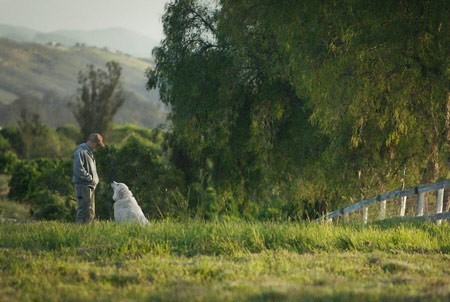 Eventually including some 10,000 orchard trees and more than 200 different kinds of crops, with a wide variety of animals, Apricot Lane Farms can be seen as a microcosm of planet Earth. But even within the confines of their spread are the seeds of an epic movie that was nearly a decade in the making and boasts a cast of thousands (most of them non-human).

John and Molly are a young married couple who want to live a meaningful life. He is a wildlife photographer — and also the director of this film — and she is a chef and foodie blogger. When they are evicted from their apartment (their rescue dog won’t stop barking), they decide to turn a hazy dream of working a farm into immediate action.

They find investors — many of them friends and family — and buy an abandoned farm about 40 miles north of Los Angeles. The place is virtually dead, but for the weeds. The topsoil is unsuited for growing crops, thanks to previous owners’ monofarming or monocropping, a widely accepted agricultural method of planting the same crop each year that can lead to higher yields but eventually strips the soil of its nutrients.

What existing structures remain are dilapidated. The Chesters can’t even start from scratch; to do that, they must destroy what is there first.

As newbies, they need guidance and are led to a farm whisperer, Alan York, whose hiring proves to be their most important decision. His vision, which will take years of hard, complex work to implement, is to create an internal ecosystem. It will be painstaking at first, but will (Alan says) become easy to run, "like surfing." 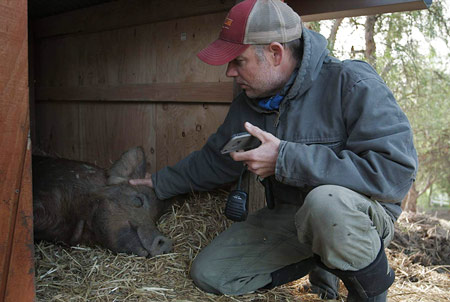 The Chesters blow through their first-year budget in six months. Among their first purchases are a pregnant pig, Emma, some cattle and goats. They begin producing manure crucial to reloading the soil with nutrients. Chickens producing organic eggs are some of their first best-sellers.

As John and Molly learn, we learn. Benefiting from exceptional wildlife photography and cinematography, "The Biggest Little Farm" is a layered and rich experience, full of life and renewal — and death.

"Our farm is energized by the impermanence of life," John realizes.

Earlier this month, the United Nations released a sweeping scientific report concluding that human civilization is speeding the extinction of a million species, altering the natural world in a way that will drastically impact humanity. We already know that modern farming practices are a significant contributor to climate change.

In its modest way, "The Biggest Little Farm" offers hope, and even suggests a way forward. It is hard to survive in a world devoid of biodiversity. Why not work with nature, instead of against it?