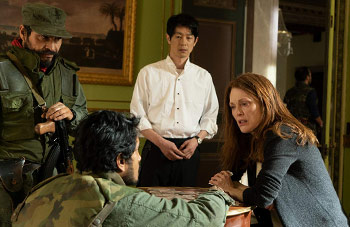 Based on Ann Patchett's best-selling novel, BEL CANTO is a dramatic love story that follows a famous soprano (Julianne Moore) who travels to a military dictatorship in South America to give a private concert at a party for a wealthy Japanese industrialist (Ken Watanabe). Just as the glittering gathering of diplomats and politicians convenes, the mansion is taken over by a guerrilla rebel group demanding the release of their imprisoned comrades. Threats are made, lives are lost, a tense negotiation begins, and a month long standoff ensues. While they are confined to the house, the hostages and their captors, who speak different languages, are forced to find ways to communicate. Music, especially the beautiful arias performed by Moore's character, a songbird in captivity, sparks a shared sense of comradeship and even love, uniting the disparate housemates as they form unexpected bonds, overcome their differences, and discover their shared humanity.

"It's opera," says Roxanne (Julianne Moore), "so everyone dies at the end."

Roxanne is an opera singer, famous around the world. Mr Hosokawa (Ken Watanabe) has admired her for years. He has seen her in concert before, from a distance, but has always longed to meet her, and when he promises to open a factory in a South American dictatorship a party is thrown for him at which he finally gets the chance. The dream i interrupted, however; as everyone is enraptured by the soprano's voice, armed guerillas burst into the building, where they had hoped to find the president. A hostage crisis ensues.

Based on Ann Patchett's bestselling novel, this is not your average hostage drama. The fear initially created by the attack cannot be sustained; neither can the guerillas keep up their aggression indefinitely. Instead, as the situation drags out over days and then weeks, a strange, dream-like experience begins. The difference between captors and hostages - all of whom have essentially become prisoners - begins to blur. With the aid of Mr Hosokawa's young translator (Ryo Kase), they begin to learn each other's languages - they have seven between them - and cultural differences give way to understanding. Several of the guerillas are of an age with the children the hostages have waiting for them outside. Their political objectives are not unsympathetic. But it's clear from the outset that those outside the compound, far less interested in talking and understanding, will never meet their idealistic demands.

Though the fact that every character in the house succumbs to this dream is perhaps unrealistic, it's a recognised effect, and director Paul Weitz makes it as convincing as anyone could. Newcomer María Mercedes Coroy is a standout, even within this accomplished cast, as the young guerilla whose shy glances at the translator first begin to hint at the human factors that will challenge the invaders' ability to carry out their threats, and the hostages' ability to take advantage of that. Awareness of a world beyond the walls, of a past and future, is gradually lost.

Moore, magnificent as always - and lent a still more magnificent singing voice by the internationally acclaimed Renée Fleming - portrays a brittle character who seems to find peace for the first time as she is forced to set aside her worldly cares, helping a young guerilla who wants to learn to sing - another language - and gradually coming to return Mr Hosokawa's affections. Yet everything here - illuminated as it is by Tobias Datum's languid cinematography, enriched as it is by Philippa Culpepper's sumptuous set designed - is overshadowed by the audience's awareness that the dream cannot endure and that the awakening, when it comes, will be a brutal one.

A song for all those caught up in conflicts that overwhelm their dreams, Bel Canto is lyrical, melodic, melancholy. It may at times be overindulgent, but that's opera.